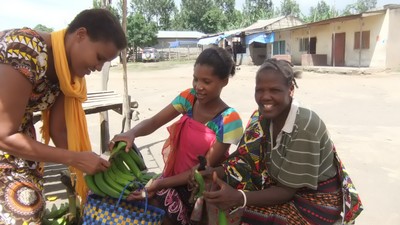 Anthony visited our projects in Tanzania in February 2016 and blogged about his experiences on the ground. Read more about his exciting adventures with our local team and the women living with HIV who benefit from our projects.

Greetings from Arusha where we arrived this morning after a longish flight via Nairobi.  Mondo TZ Chairman, David Kinisi, met us and we had a good discussion with him en route to the hotel.  One unwelcome change since my last visit is the horrendous traffic on the Moshi-Arusha road.  Mainly due to a road widening scheme (Chinese money).

However, we hit the ground running and spent the afternoon in Ngaramtoni on the slopes of Mt Meru (rural township) where so much of our work in recent years has taken place. Wonderful to meet up with our local team run by Mama Erneth and to see several of the HIV affected women who we have helped to set up in business. Cheerful kids in all directions (“Good morning Sir, Good morning maam” delivered with huge enthusiasm mid-afternoon!), the usual exchanges of greetings in Swahili with local folk and in Ki Maa with the Maasai (a few words go a very long way!). The whole environment is addictive with such obvious good humour and courtesy.

The first lady we visited, Grace, was selling bananas. She was being helped by her sister, Mary, but one particularly charming touch was her small son, 9 year old Abdul, who was acting as roaming sales agent!  Carrying a large basket of bananas on his head, he was plying for trade in the nearby streets.  His cheerful attitude marked him out as a future candidate on the equivalent of Dragon’s Den!