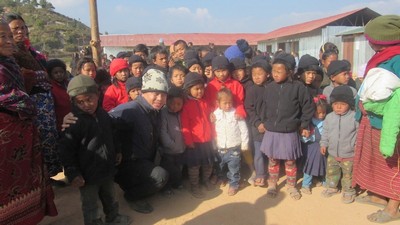 Throughout the course of December, we launched a winter appeal to finance the purchase of fleeces and warm hats for the students of the Helambu valley. Winters in Nepal are bitter and harsh. Coupled with the devastation caused by the earthquakes in April 2015 and the total loss of villagers’ belonging, we were worried that students would not be able to make it to school.

So our teams worked throughout the Christmas period to distribute warm clothes to the children, with the first supply run being undertaken by our real Santa Clauses on their sleighs (on their bikes and jeeps) on Christmas eve. They were greeted at the schools by hundreds of children awaiting their presents. And the photos taken by the team clearly show the delight on the faces of the students as they collected their warm fleeces. Over a 1000 warm fleeces and hats were distributed across a number of schools in the valleys, and more distributions are planned for early-2016.

Alongside the provision of warm winter clothes, the village masons we trained in December have also been working hard to reinforce the Temporary Learning Centres to make them fit for the winter. We’ve also been working to provide mattresses to school hostels and, of course, continuing with the re-building of the schools.